Why We Invested In Satellite Vu 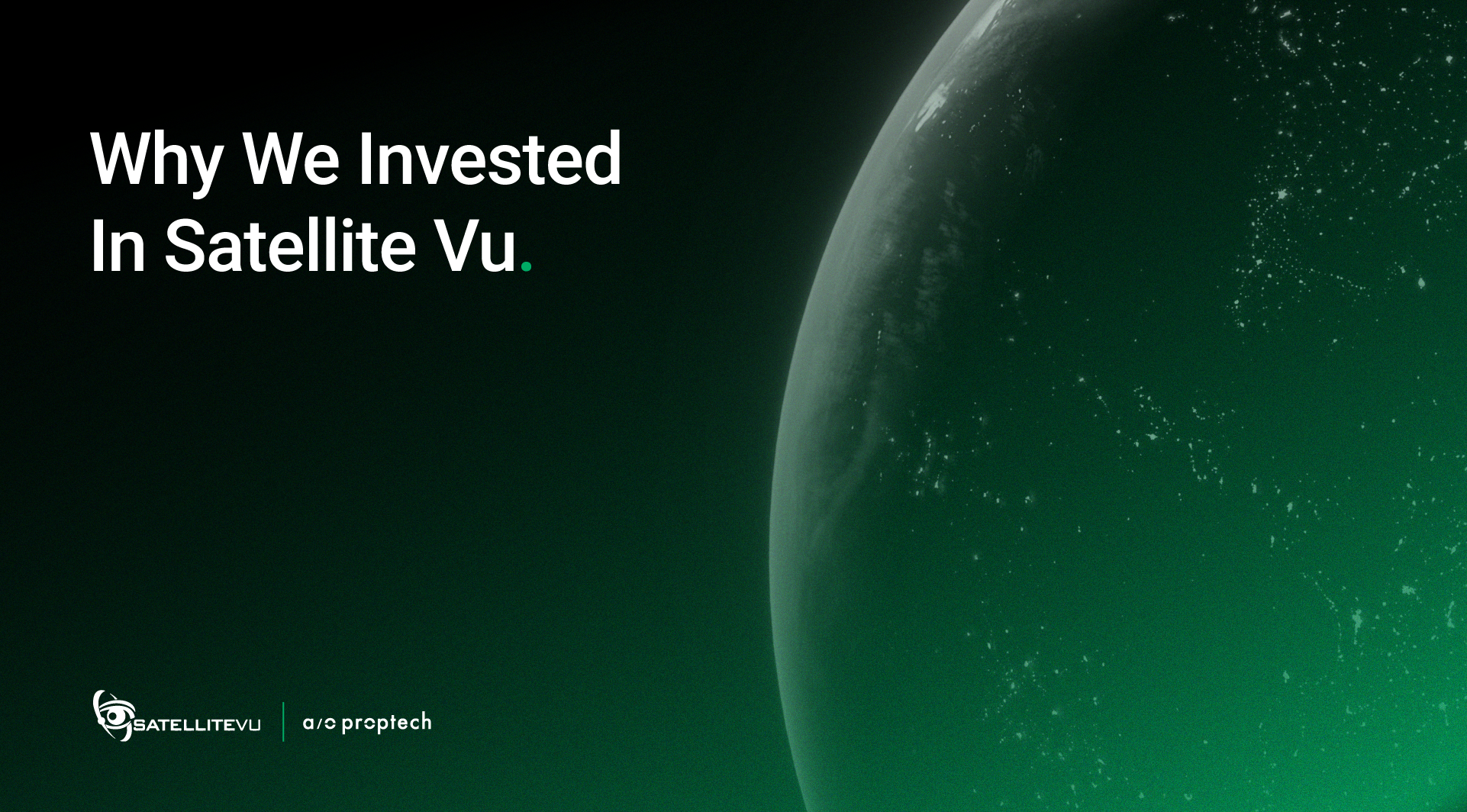 Thank you! Your submission has been received!
Oops! Something went wrong while submitting the form.
Article Glossary
No items found.

Why We Invested In Satellite Vu

Satellite Vu is a UK based Earth Observation (EO) company that will deploy a constellation of seven satellites focused on collecting and analyzing infrared (IR) imagery in low Earth orbit. The company will offer an unprecedented 3m resolution and re-visit rate of every few hours day or night, once the full constellation launches, to capture a highly unique data set of measuring the thermal intelligence/footprint of every building and structure on Earth.

We are very excited about our investment in Satellite Vu as it will be a key enabler in accelerating decarbonization in the real estate industry, a founding pillar of our vision at A/O PropTech. In order to truly make a difference in solving climate change, we need data to make better-informed decisions and Satellite Vu will enable us to measure the built world like never before.

Considering buildings account for approximately 40% of total electricity usage and contribute 30% of all greenhouse gas emissions globally, solving this problem is no easy feat. Until now, landlords have been installing all different types of sensors in our buildings but mostly to better measure indoor air quality, temperature, humidity, and other data to help improve HVAC efficiency. Satellite Vu will offer the most efficient and scalable means of monitoring assets for thermal efficiency which is targeted at the building envelope. A building’s envelope design efficiency is essential to energy-efficient building design as it helps regulate the building’s temperature, thereby reducing reliance on mechanical HVAC systems to heat or cool our buildings. A thermally efficient building envelope reduces energy consumption and costs as well as increases comfort levels for occupants.

What makes Satellite Vu even more exciting is building thermal intelligence is only just one of many problems they can help address. So far our teams have come up with to date over 20 other novel use cases their data could be used for including industrial gas leak detection, water leak detection, detecting illegal fishing, and monitoring all sorts of economic activity. The market for infrared data is currently estimated at $700m across the finance, energy, smart cities, disasters, and defence sectors but we anticipate this estimate to be just the start of what will be an entirely new category and part of the multi-billion dollar EO market.

Satellite Vu is building a new kind of SpaceTech company focused on data analytics. Compared to other SpaceTech start-ups or legacy/established companies, their approach of outsourcing the development, build, and operations of their satellites not only reduces the required time to market and capex but also retired the technical hardware technology risks involved representing an evolution in the market. The company is partnering with Surrey Satellite Technology Ltd (SSTL) which is the world’s leading commercial small satellite company having launched 70 satellites since its founding in 1985.

We initially met with the founding team of Anthony Baker, Tobias Reinicke, and Simon Tucker in early 2020 after they recently graduated from one of the world’s leading accelerators for SpaceTech start-ups, Seraphim Space Camp. We were impressed with the founding team who have built satellite communication companies from scratch to over $1 billion in value, had experience in GIS architecture, exposure to EO analytics, and energy sector expertise. The financing round is being led by Seraphim Capital, the pre-eminent investor in SpaceTech start-ups globally, who worked closely with the company in their Space Camp and awarded the company as the best performing in their Mission 4 accelerator class.

While the launch of the company’s first satellite isn’t anticipated until December 2022, there is a lot of work to be done now to educate the market of the importance of their monitoring data. I am excited to be joining Satellite Vu as a Board Observer to work alongside the team and help identify and partner with stakeholders in the real estate sector. There are several exciting applications for how their monitoring data could be embraced by the sector.

Wasted energy from buildings costs approximately $300bn per year. Satellite Vu will enable the identification of bad actors in the property sector to help regulators enforce new decarbonization laws and identify the worst offending buildings. In urban environments, this is particularly important as cities are struggling to combat the urban heat island effect which are a result of large areas being covered by asphalt as well as buildings that are absorbing sunlight and radiating heat. As exposure to heat is increasing due to climate change this causes a runaway effect as more hot weather requires more air conditioning consequently producing more outdoor heat compounding the effect. According to the U.S. Center for Disease Control and Prevention, extreme heat now causes more deaths in U.S. cities than all other weather events combined.

Over the next decade, we need a wave of green building entrepreneurs to help retrofit the entire existing building stock to meet the EU’s 2030 Climate Target Plan. Monitoring and heat mapping data from Satellite Vu could be leveraged to create new opportunities for real estate entrepreneurs and service providers to upgrade and retrofit poorly insulated buildings. There are approximately 220 million buildings across the existing European building stock which were built before 2000 which could be ripe for renovation. Identifying underutilized roof assets and thermally inefficient building envelopes could help usher in more green roofs and utilizing more biophilic design practices to more effectively regulate building temperatures. Studies conducted at the University of Oxford found that ivy growing on a building’s walls protected it by acting as a thermal shield increasing wall temperatures by 15% in cold weather and reducing the temperature by 36% in hot weather. Such activities are already happening in cities such as Singapore which for decades have used foliage to help keep the city’s temperatures down.

At A/O PropTech we are committed to funding innovative solutions to some of the world’s toughest challenges. Now is the time we must embrace new ideas and use all of the information we have available to have a fighting chance in accelerating decarbonization.