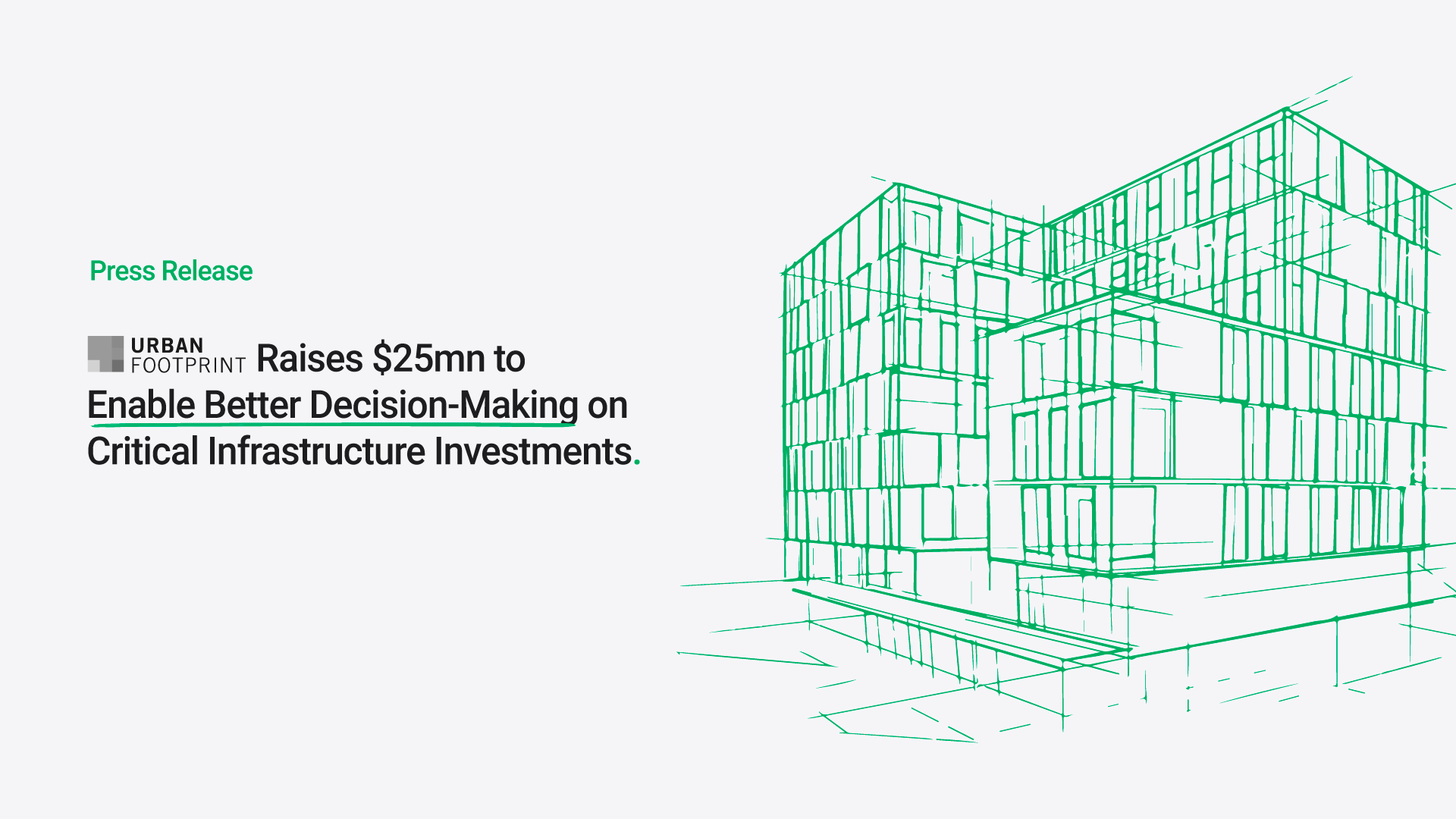 Berkeley, CA - May 18, 2022 -- UrbanFootprint, the world’s first Urban Intelligence platform, today announced that it has raised a $25 million Series B funding round led by Citi (via its Citi Ventures and SPRINT groups) and Social Capital, an early investor in UrbanFootprint. 2150, A/O PropTech, Assured Guaranty, and Dcode Capital joined as new investors. Previous investors Valo Ventures and Radicle Impact also participated in the round. UrbanFootprint will deploy this new capital to accelerate the delivery of climate and community intelligence to the energy, government, finance, and real estate sectors.

Public and private institutions across the globe are struggling to prioritize where to invest in the face of unprecedented climate threats and social challenges. UrbanFootprint’s data and software help some of the largest and most influential institutions target where to invest resources to reduce climate vulnerability and increase the resilience of critical infrastructure and communities.

UrbanFootprint compiles, maps, and analyzes thousands of previously-siloed data points covering climate, land use, economic, and social conditions and connects them to a proprietary canvas of 160 million land parcels that cover nearly every inch of the United States. Customers using UrbanFootprint’s sector-specific data products and mapping tools can hone in on any area in the country and quickly evaluate existing conditions across hundreds of community, social, and environmental metrics, measure and map risk and market opportunities, and prioritize where to deploy interventions and investments.

“UrbanFootprint provides decision makers across industries with the ground-level insights they need to quickly and accurately evaluate risk and prioritize resources where they are needed most,” said Joe DiStefano, Co-Founder and CEO of UrbanFootprint. “Today, UrbanFootprint is used by some of the nation's largest energy utilities, financial institutions, government agencies, and urban planning firms to answer complex questions in minutes versus weeks or months.”

U.S. energy utilities, which spent $143 billion on infrastructure in 2021, use UrbanFootprint’s energy solutions to prioritize where to deploy new EV chargers and harden their grids against accelerating heat wave and fire risk. Government agencies use UrbanFootprint’s government solutions to target billions of dollars in food, housing, and disaster relief to vulnerable Americans. Top urban planning firms and real estate investors use UrbanFootprint to inform where to invest in new housing, transit systems, and commercial space. And major financial institutions and insurers, challenged with $145 billion in climate-related disasters in 2021, deploy

UrbanFootprint’s ESG and finance solutions to understand where climate threats and economic stress will impact investment risk and returns.

Speaking about the investment, Othmane Zrikem said: “At A/O PropTech we’ve long understood the power of data-driven insights in making decisions; that is why we are very excited in backing the first Urban Intelligence platform. UrbanFootprint helps energy, finance, and government institutions target investments to reduce climate vulnerability and increase the resilience of critical infrastructure and communities by providing ground-level insights to all decision-makers.

Speaking about the investment, Adam Schuit said: “UrbanFootprint is a platform born from urban planners which unifies datasets to help cities, energy utilities, financial institutions, and mobility companies to answer the question of where? Where to invest and where to deploy resources all the way down to the neighbourhood, block, or asset level. I look forward to joining UrbanFootprint as a Board Observer to work alongside the team and help identify and partner with industry stakeholders to further support our mission at A/O PropTech of investing in a better built world.