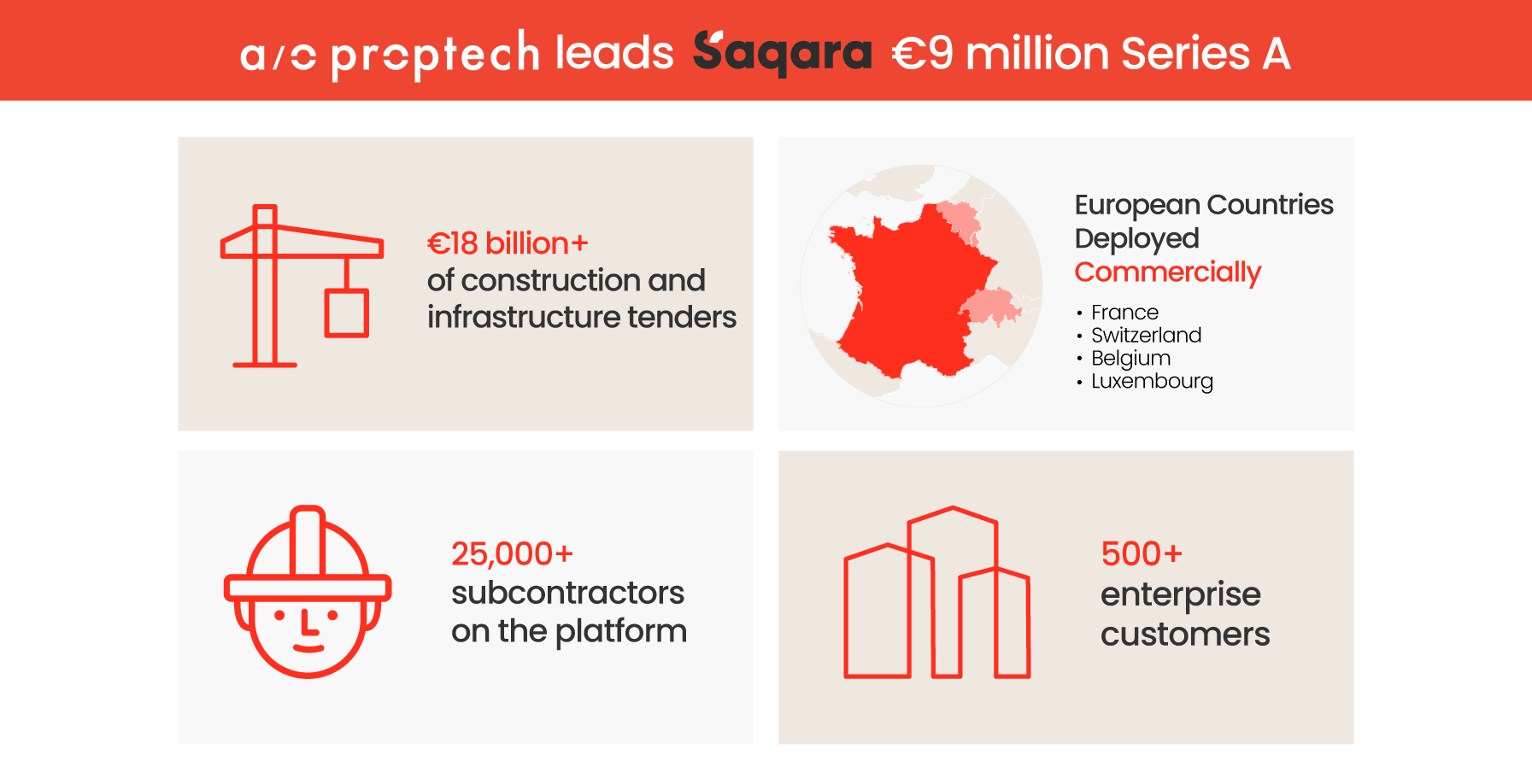 Saqara secures $10.6 million in Series A funding to support its international expansion

French scale-up Saqara, which provides a digital procurement platform to the construction industry, has raised a further $10.6 million in Series A funding led by Europe’s largest proptech VC, A/O PropTech.

Saqara has gone from strength to strength in the French construction market with 4,500 projects launched on its platform since 2018, totalling over €18 billion of construction and infrastructure works.

Its success reflects the key role it plays in digitising bid management which minimises admin, reduces costs and drives efficiencies and transparency across procurement.

In 2020 Saqara expanded into Belgium, Luxembourg and Switzerland.

On the back of its continued success, Saqara’s latest funding round will help fuel its international expansion into Germany, Netherlands, UK and southern Europe as well as broaden its product suite and platform.

The UK remains a major player in the global construction industry and Saqara’s expansion will help to digitise and simplify the procurement process which should aid in driving efficiencies and transparency in the UK construction sector.

According to McKinsey, the global construction sector has recorded 1% productivity growth annually for the past two decades, compared to 3.6% in the manufacturing sector.

This suggests that there is still scope for productivity growth within the construction sector, which has tended to be over-reliant on traditional methods and a reluctance to adopt new technologies.

Saqara plays a key role in driving efficiencies across the bid management process, by reducing reliance on paper and spreadsheets and creating a platform which brings the entire procurement process into an easy-to-use centralised software.

Environmental concerns are increasingly playing into decision making within the real estate industry and by having one centralised platform it will enhance visibility over the entire supply chain and allow developers to track material sourcing and their carbon footprint.

As part of its ambitious international growth plans and on the back of its latest fundraise Saqara has rebranded, from its previous name AOS, the abbreviation for Appels d’Offres Simplifiés (translated as Simplified Invitations to Tender).

Saqara is derived from Saqqarah, an Egyptian temple and vestige that is also an emblematic construction of the 3rd millennium. It honours the world’s greatest builders and at the same time represents timelessness. It expresses the Saqara’s desire to act for the common good and to leave a positive mark on the world.

Alexandre Brochot, president of Saqara said: “We are delighted to welcome new partners and to work towards building tomorrow’s world together. This financing round will be indispensable to our goal to continuously innovate and develop our products and to offer our current and future clients an unrivalled quality of service and user experience that will fully meet their expectations.

We will also be able to accelerate our international growth by expanding to 4 countries annually.In the long term, we want to play a key role in the digitalisation of the sector to ensure that the everyday activities of professionals in the construction industry are made easier while leaving a positive mark on the world.”

Othmane Zrikem, chief data officer of A/O PropTech said:“In the context of inflationary pressure and material shortages, there has never been a more important time for property developers and construction firms to digitise their processes and drive efficiencies. Saqara’s platform makes that possible.We are extremely proud to lead Saqara’s Series A as it expands into the UK, Germany and North Africa. We have been impressed by Saqara’s core product which has processed over €18 billion of construction and infrastructure tenders since 2018. Saqara is the leading European ConTech platform for bid management process and we are excited about the new products currently under development which will help further revolutionise the construction industry going forward.”